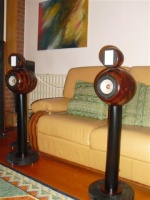 mains cables can.. and DO make a difference.

you must remember that many are configured to act as a kind of passive filtration for RFI That already exists in the signal. RFI is often sent back to earth by the sheilding employed in many mains cables, plus good contacts seem to make a huge difference.

I recal an article from chord who said that over the entire chain of mains from power station to your kit, the point of greatest resistance, was the 3 pin mains plug that goes into a wall.. Therefore good silver plated plugs can help to lower this resistence and get a good supply of mains into your system. Certainly ive heard more improvements from changing to wattgate IEC 320's than i have from any cable used. I plan to change the basic plastic IEC's on my russ andrews yello's for some silver plated wattgates.

However, these differences are all subtle compared to what i experienced with mains filtration, I didnt beleive they could make a huge difference myself, and then i borrowed an isotek Orion. Having tried it in a few systems now, i can say that there wasnt one that wasnt positively improved by running from the orion.

The presence of a recording jumped up a notch, things became faster, cleaner, more musical and generally just more enjoyable. Take it out, and it was like the music has suddenly been slowed down, everything became dull and lac lustre.

I remember a similar demonstration at a recent bakeoff... a system comprising Cyrus dacXP and monoblocks into monitor audio studio 20SE's... all sounded just fine, nothing seemed tobe missing. Then it was plugged into an isotek Sigmas.... Once again, the performance improved in every single way imagineable. Bass was deeper and tighter, treble smoother cleaner and more open, midrange more projected and far better imaged. Everything about the sound was now better.

The mains cables used beyond the filter seem to make less difference, hence i just stick with the yello's. I am now a convert and no longer a naysayer on the whole mains debate

Get yourself a cheap filter and some basic cables, Throw a few wattgates on them from ebay (about £15 each) and you will be laughing.