Ainda sobre as limitações do CD:

If you had a room and a system and choice of music that you have full control over, do you think you could tell a €200 CD player from a €15000 transport feeding one of your DAC’s?

I wouldn’t expect to hear a difference actually.


Because of the jitter suppression?

Yes, provided of course that the data is read correctly.

Given the Nyquist theorem and the limits of human hearing, is the only reason we sometimes can tell 16 bits 44,1kHz from hi-res, just the reconstruction filters?
Because theoretically we shouldn’t hear the higher resolution.

I don’t know, maybe it has to do with non-linearities in the ear, so high frequencies above 20kHz can end up at lower frequencies through intermodulation.
Maybe there’s something to that, I don’t know.
But then the speakers have to do that, and the microphones etc.


A problem is that very few microphones record that high frequencies.
If you analyze a 24-bit, 96kHz recording of classical music, it might not have anything above, say, 25kHz.
But still people think it sounds much better.
So could it be the bit depth, the extra dynamics?

It’s different in the D-A converter, with the frequencies it can transmit and the anti-aliasing or the reconstruction filter which can be much flatter, so it gives you less artifacts from the filter.


Your equipment supports up to 24 bits, 192kHz. Is that completely overkill?

Yes. Bob Stuart of Meridian once gave a talk at AES and his proposal was to keep it at 60 kHz.


The closest one we have as a standard is 88,2, but more equipment supports 96.


So anyone claiming to hear a difference between 96 and 192 would either be hearing placebo or in how it was converted to that sampling rate?

That is a point of course.
I know of professional people having done tests with these conversions and they can hardly hear a difference, even if it’s up to 192 and down to 44,1 again.


Especially if they use Saracon!

That seems to have become a bit of a standard?

There are some competitors, but it’s one of the better ones.
There’s a website actually, comparing all kinds of sampling rate converters.


And saracon does very well.


At least in theory, our ears can manage more than 96dB of dynamics, but we can’t hear much above 20kHz.
So according to that, the extra dynamics should be better.


That’s because they will do processing with the sound, so they want that margin.

As an end format, you can do a very decent encoding in 16 bits.
I think the dynamic range is enough, you don’t have such dynamic range in a listening situation usually.


Buy you have a finite number of steps within those 16 bit, so it’s not infinite precision.
Would you ever need a finer resolution than that?

The question is whether you need the signal to noise ratio basically.
It’s 96dB at 16 bits, which is huge.
You have maybe a 30dB dynamic range in the music, and that is already quite a lot actually.
So you still have a 60dB lower noise floor.
I don’t think you hear the noise of a CD.
At normal listening levels, do you hear the noise floor?

See, that’s what I mean.

MI: Is digital recording at it's peak or is it just setting the grounds. Some say that analog vinyl had 100 years to improve and digital is here for some good 20 years. How do you see this?

DW: With the currently standardized high sampling rates (88.2kHz, 96kHz, 176.4kHz etc.) and a wordlength of 24 bits, we have hit the boundary of what makes sense (sampling rate) and what is physically achievable (wordlength). I can imagine that there will be improvements when doing A/D and D/A conversion, but the formats (sampling rates, wordlength) are here to stay, I hope at least.


MI: What sampling frequency is enough? Some say that even 44 khz 16 bit is good if mastered well, other say that 24bit and 96khz is more than enough, and again third camp say that only 192 khz (DSD) or even more would bring the quality of analogue or natural timber to life.

DW: For the human hearing 44.1/16 is enough. For technical reasons it is advantageous to go with higher sampling rates. 88.2 or 96 would be fine. Anything higher does not make much sense in my opinion. The advantages of higher sampling rates (higher than 44.1) are that the filters in the A/D and D/A Converters can be made less demanding and thus less colouring. For the processing of digital audio, which is necessary during e.g. the mastering process, it is advantageous to have high sampling rates as well.


MI: Do you have perspective on ever going tube vs transistor debate?

DW: Take what you like best. A tube is colouring the signal differently than a transistor does, so it is a matter of taste what you prefer. One can follow the purist approach, where any colouring is avoided as much as possible. In that case I would go with transistors.


MI: Some say analog and vinyl are still better sounding. How do you feel about this?

DW: Again, matter of taste. I never argue about such things, because I do not want to tell people what they “ought to like”. If they like vinyl better, so be it. I don’t have a problem with that. Vinyl is technically inferior to a CD, but it seems some like it, maybe exactly because of those shortcomings.

We see that year by year there is kind of race for bits and high sampling rates. Where do you think this will stop?

Regarding bits: The ear can not hear more then about 126dB of dynamic range under extreme conditions. At around 6dB per bit, that amounts to 21 bits, which is what my AD122 MKIII provides (unweighted).

Regarding sample rate: The ear can not hear over 25-30KHz, therefore 60-70KHz would be ideal. Unfortunately there is no 65KHz standard, but 88.2KHz or even 96KHz is not too far from the optimal rate. 192KHz is way off the mark. It brings about higher distortions, bigger data files, increased processing costs, and all that for no up side! People that think that more samples are better, and that digital is only an approximation, do not understand the fundamentals of digital audio.


What rate and bits are enough for today music reproduction and recording?

For music production, for adding and mixing many channels, for various digital processing, we need more bits. One must make a distinction between processing bits and conversion bits. Say for example that you have 32 channels, each channel made out of 24 conversion bits. If you sum the channels you end up with 31 bits. At the end of the process, the 31 bit sum can be reduced back to say 24 bits, or to 16 bits, because the ear can not hear 31 bits (186dB dynamic range). It is best to have a lot of processing bits. How many, it depends on the number of channels and on the type of processing.

One has to make a distinction between the audio sample rate and the rate of a localized process:

The audio sample rate is the rate that carries the music data itself. Roughly speaking, the audio bandwidth itself is slightly less then half the sample rate. A 44.1KHz CD can contains music to about 20KHz.

At the same time, there are many cases when we use much higher “localized rates”. Such higher rates do not increase the musical content. The higher rates still offer the same original bandwidth of the sample rate. We up sample or down sample between localized rates for various technical reasons. For example, virtually all modern DA’s operate at 64-1024 times the sample rate speeds (in the many MHz range). Operating at such high rates simplifies the requirements of the anti imaging filter (an analog filter located after the DA conversion). The decision about the ideal localized rate depends on the technology and the task at hand. It is an engineering decision, not an ear based decision. As always a poor implementation may introduce Sonics, and it would be wise to refrain from the often encountered practice of far reaching false generalizations, so common in the audio community.


When CD came on horizon nobody talked about jitter. Now days everyone is having his own philosophy around it. Can you elaborate on this subject please. What is the real importance and how to approach this?

Jitter is not only an audio issue. I was dealing with jitter issues in medical conversion, way before the days of digital audio. Jitter is an issue for all conversion (video, instrumentation, telecom, medical, industrial controls…).

The concept of conversion is based on two requirements:

Think of a movie camera with an “unsteady motor”, or a playback film projector with a motor that rattles between too slow and too fast. Either case will distort the outcome, and the distortion depends on both the jitter (speed variations), and on the subject itself. Jitter would not do much harm to a steady object, but it does alter the view of a fast moving object. Similarly, in audio, the distortions due to uneven timing (jitter) is due to the interaction between the clock imperfection and the audio itself. Unlike tube, transformer or many other distortions, the outcome due to jitter is NOT predictable or repeatable. There is no such thing as “good sounding jitter”. There are many types and causes of jitters. What we hear is not only about the jitter amplitude and frequency. It is also about jitter type.

Conversion jitter may alter the sound significantly. At the same time, transferring data (that was already converted) between say AD and a computer, or between other digital sources and digital destinations, does not call for great jitter performance. It is only during the conversion process that jitter needs to be very low. Data transfer jitter is not much of an issue, when you are only moving ones and zeros. 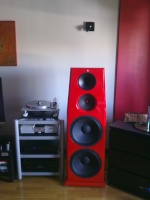 Daniel Weiss escreveu:For the human hearing 44.1/16 is enough. For technical reasons it is advantageous to go with higher sampling rates. 88.2 or 96 would be fine. Anything higher does not make much sense in my opinion. The advantages of higher sampling rates (higher than 44.1) are that the filters in the A/D and D/A Converters can be made less demanding and thus less colouring.