Bem a melhor analogia que posso fazer fazer é escolher entre a a actual equipa do Real de Madrid e a do Barcelona. Que grande dilema.
Neste momento tenho um Tu 719 e já é uma máquina fabulosa. Se tivesse oportunidade de escolher optaria pelo Tu 919, mas nunca os ouvi ao mesmo tempo.
No Tuner information:
Sansui TU-9900 (1974, $570, front 1, front 2, back, schematic, service manual) search eBay
The TU-9900 has 5 gangs and 3 IF filters, two of which have 4 stages rather than a typical ceramic filter's 2 stages, so it's like 5 filters if we count them in the traditional fashion. The TU-9900 is solidly built and our panelists who have used it praise its sound quality and DX performance, but David "A" rates it well below the TU-X1 for sound even though Eric (a non-audiophile) felt that it was "close enough." Our panelist Bob did some mods on his: "The TU-9900 has incredible potential. At first, it just did not open up sonically, but after trying a bunch of things, I nailed it. It is there now. I removed tantulum caps in the signal path. The big gain was replacing the TA-7136P op-amps, which were limiting the sonics in a big way. They are inline 7-pin units, so I had to put in 7-pin inline sockets, and custom modify a standard single op-amp to solder onto a 7-pin header. It was about three hours' work just to make the replacements, but well worth it. I also added six polypropylene caps, along with new power supply caps. With all the mods, the TU-9900 may be one of the top all-around tuners ever built. I have talked to many people who feel that a stock TU-9900 just smokes about everything out there for distant reception capability. If your unit does not astound you, it is broken or out of alignment. It will easily surpass a stock KT-8300 by a decent amount. I think the sonics were the holdback on the 9900s, but not anymore."

The TU-9900 is very sensitive and selective in stock form, better than just about any analog tuner that commonly sells for under $500 on eBay. It also offers many nice features, including a calibration tone and scope outputs. Because it uses LC filters that are encased in metal and plastic enclosures, no one should buy a TU-9900 expecting to replace the filters, but our contributor John C. says: "Aside from the power supply, the TU-9900 is very easy to work on and mod. Bill Ammons' op-amp boards make it very easy to change out the old op-amps and since you can leave 4 caps out of the audio output the cost, compared to using say Black Gates for those 4 caps, is actually a wash." See John's comparison of his modded TU-9900 to his modded TU-919 in the TU-919 writeup. Our contributor doug s. says, "I own a modded refurbished TU-X1, and I can say that its performance compared to the TU-9900's is only the tiniest bit better, with a bit more low end, and you really need to hear them side-by-side to discern differences." On eBay, the TU-9900 usually sells for around $450-700 but anywhere from $380-800+ is possible, depending on condition, the seller's track record, and fluctuations in demand. A mint one sold for $952 in 12/07 and the all-time record was $1,200 in 2/08 for one with the original box and manual (that's one pricey box). [DA][BF][EF]
Sansui TU-919 (1979, $585, front, closeup, back, inside, block diagram, brochure1, 2, 3, 4, 5, 6) search eBay
The TU-919 is now widely recognized as a top tuner and a worthy rival of Sansui's classic TU-9900 (if perhaps a bit short of a TU-X1). The TU-919 has a 5-gang analog tuning capacitor with a digital LED readout like the TU-719 has. Our panelist Bob has details on the TU-919's 4 filters: "The filters are set up a little differently than, say, a KT-7500. The TU-919 uses three 280 kHz GDT flat group delay 3-pin filters for the wide IF bandwidth mode, and what appears to be one 150 kHz 3-pin filter for narrow mode - all Murata, and well-matched stock. In narrow it is using all 4 filters, and in wide just the three 280 GDT's. As a result, the wide mode is not super wide, and really almost makes the narrow extraneous, sort of like the Accuphase T-100 or Kenwood KT-8005 or 8007. The TU-919 would probably be great for DXing with a 110 kHz filter in narrow for getting adjacent channels." The TU-919 is more sensitive than the TU-717 and 719, and our audiophile reviewers agree that the TU-919 sounds great. AM radio listeners should note that the TU-919 has a wide-narrow filter for the AM band which can eliminate typical AM splatter noise, making it the best-sounding AM section Bob has ever heard. He adds, "Sensitivity is very good, and the TU-919 excels in having probably one of the best stock stereo blend noise filters. It really does a good job killing the noise, keeping the stereo image, without rolling off the highs. The ergonomics are good, but you are wishing you could turn the crystal lock off on occasion. It locks on and hangs on well past the indicated dial marking, then lets go and steps to the next frequency (in .1's). It's just odd because you are now well past where the dial says you should be. It does this in both directions, depending on which way you approach the station."

Our contributor Ed Hanlon did some work on a TU-919: "My favorite tuner of all time is a newly modified TU-919. First off, we defeated that silly quartz lock tuning (but kept the pretty green LED on all the time). Next we rearranged the filter configuration so that instead of 3 filters functioning in wide mode, now just two do. The narrow band, which before only added a fourth filter to the 3 in wide, now has 2 filters. So instead of being a 3+1, this tuner is now a 2+2. Wide bandwidth has enhanced fidelity, and you can even notice a difference between the wide and narrow settings! And unlike our first go-round with defeating quartz lock tuning (in the TU-719, perhaps?), defeating the lock on the TU-919 works perfectly. Right now I'm listening to WQXR-96.3, with no splash from my local station on 96.5, and it sounds wonderful. The one nit I can pick: even with the stereo threshold cranked all the way down, this tuner will pop in and out of stereo on very weak signals. By changing the pot that controls the stereo threshold, the user can decide how much noise is too much, and has the option of using the very fine FM Noise Filter this unit employs. It looks like the stereo threshold will affect the muting, meaning that if we change that pot, we may lose the muting function. I say 'who cares?' I never use FM muting anyway."

Our contributor John C. did a comparison: "I initially felt that my modded TU-919 was better sounder than my TU-9900, until I got around to replacing the 9900's op-amps, direct coupling the output and bypassing the variable output control. Huge, huge improvement, made the 919 sound flat, and this after having felt that the 919 was my reference. Relooked at the 919 and replaced a couple of electrolytics with some film caps, and a couple of other things knowing now what could achieved, and it came in much closer than it had been." See how one TU-919 sounded compared to other top tuners on our Shootouts page, and read our panelist David "A"'s Ricochet. 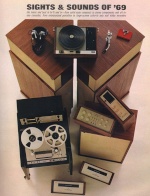